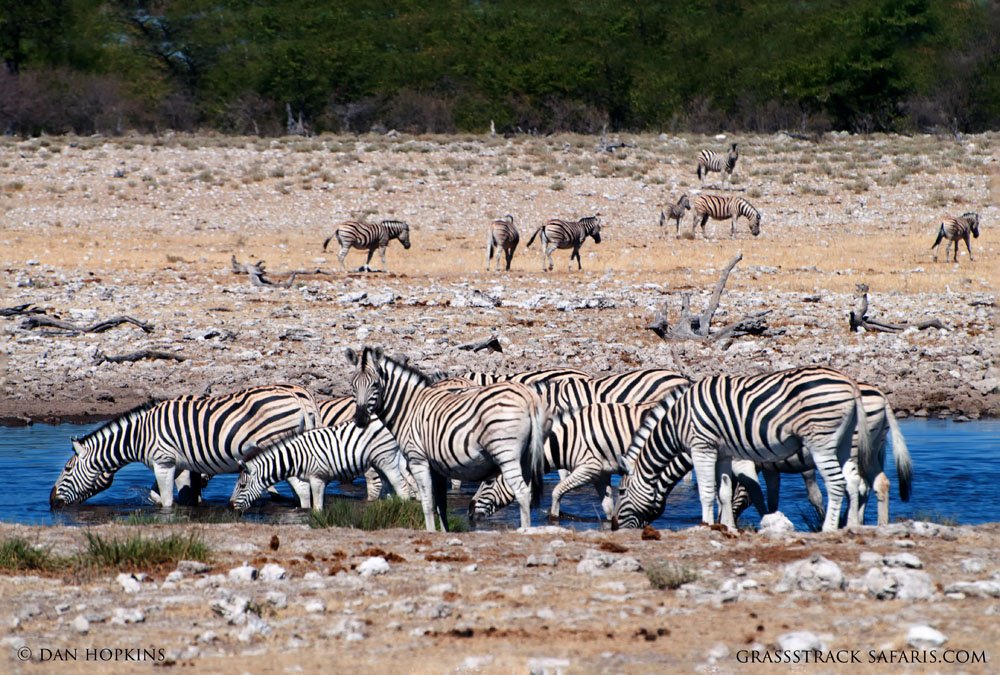 Etosha National Park is a vast, 8600 sq mile reserve located in northern Namibia.  It is one of Namibia’s largest parks.  Situated on the north-west edge of the Kalahari, Etosha Pan supports hundreds of species of birds and mammals along with desert specialists and rarities.  It is a land of endless horizons and shimmering mirages that form on the white expanse of the pan.  The centerpiece of the park is the enormous Etosha Pan, the remains of an ancient lake.  The pan itself is roughly 70 miles from the east end to the west and 40 miles from north to south, covering nearly 25% of the national park area. 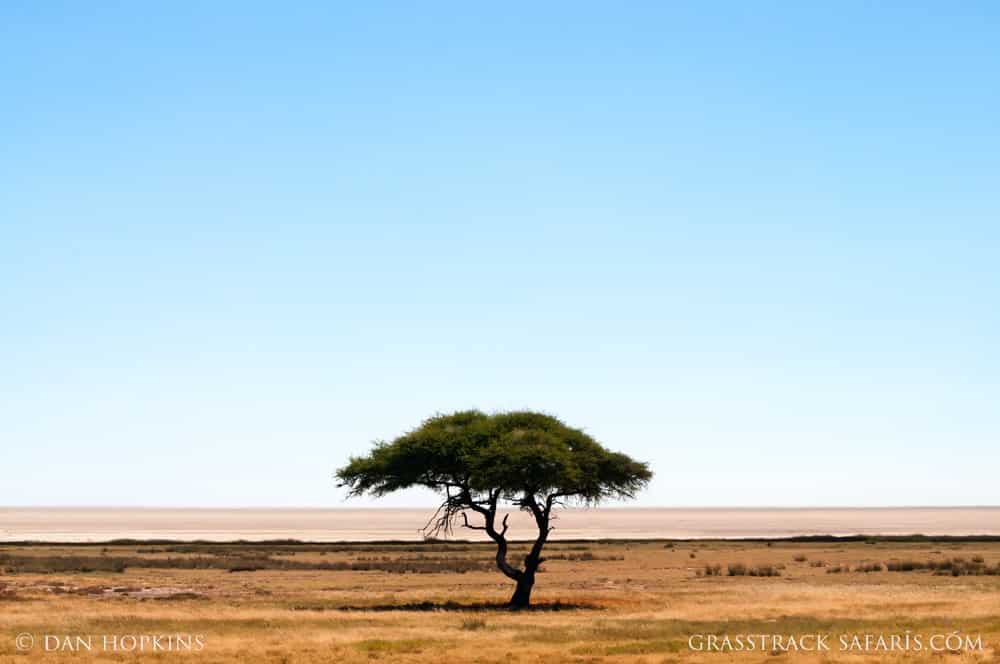 Millions of years ago rivers from the north and east emptied into the Ovambo Depression creating a vast lake.  The Kunene River is thought to have fed into the lake but tectonic shift and uplift gradually changed the course of this river. Now the Kunene River flows due west and empties into the Atlantic.  Over time the searing sun slowly evaporated the water leaving behind a saline desert. In fact if the Etosha Pan was full today it would be the third largest lake in the world!  The Ekuma River is the main source of water for the pan today.  Today the pan rarely holds water and only when there have been sufficient rains in Angola.  The floodwaters move south from Angola along the dry channels, covering the pans with a shallow layer of water.  When the flood does occur upwards of a million flamingos and pelicans descend on Etosha to breed. 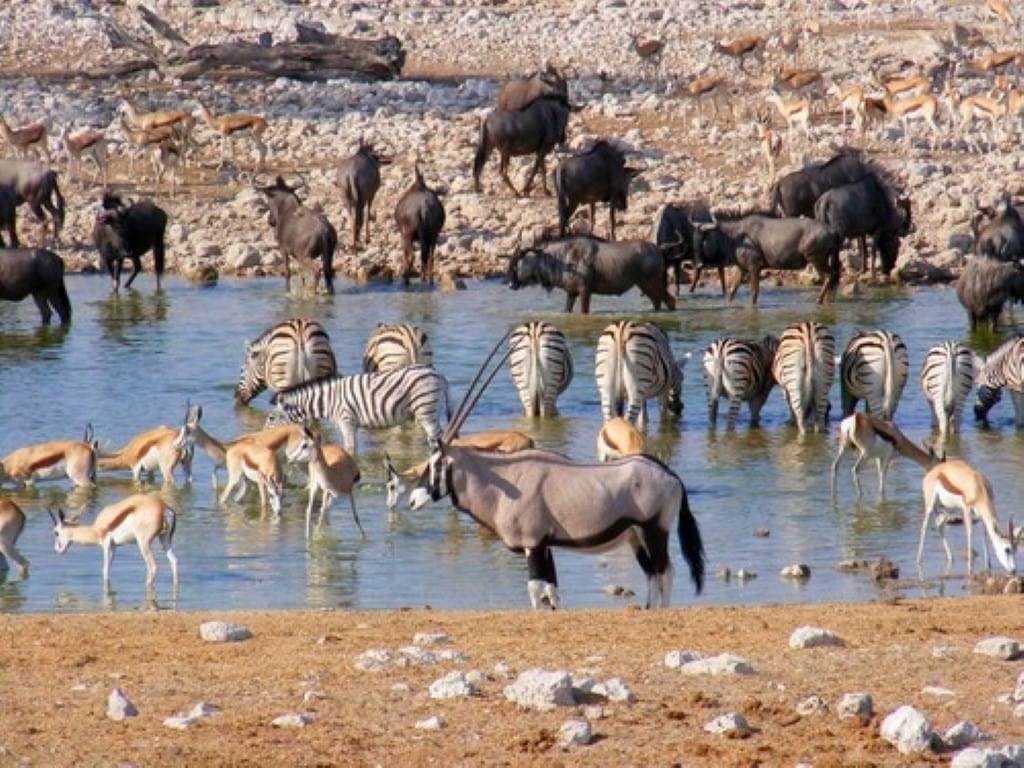 The pan itself is a vast, flat, and dusty place.  Extreme heat and inhospitable saline soil prevent all but the most hardy grasses from growing.  Beyond the edges of the pan, Etosha is mostly open grasslands which allows for easy game viewing in the right season.  Mopane woodlands occur in the east and groves of makalani palms encircle the waterholes.  What makes this dry place so special is the presence of naturally occurring springs on the southern border of the pan.  As the dry season progresses, huge numbers of wildlife come to these springs, the only permanent water in the area.  This variety of habitat supports an abundance of game.

One of the highlights of a visit to Etosha is simply sitting quietly near a waterhole and watching the constant parade of animals as they come to drink.  Predators know this and will often hunt near these water sources.  If you’re lucky you may witness a pride of lions on the hunt. 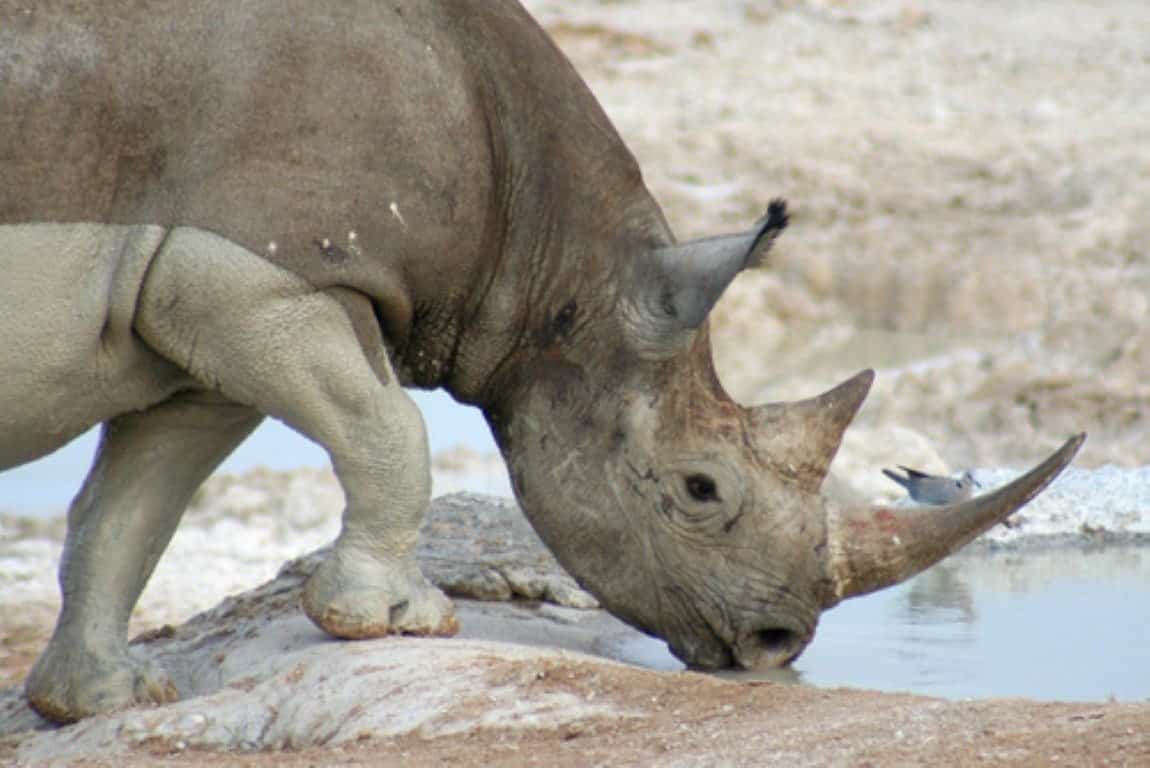 Elephants, some of the biggest in Africa, migrate throughout the greater Etosha ecosystem in the course of a year.  During the rainy season elephants will migrate toward the Kaokoveld in the northwest.  As the dry season progresses they migrate back to the permanent springs and waterholes south of the pan.

The rare and endangered black rhino can be seen in the western sections and frequently at water holes at night.  A small number of white rhino have been reintroduced into the east side of the park.

The plains zebra and Hartmann’s mountain zebra are found in the park, though the mountain zebra is found mainly in the hilly, rugged west.   Good number of lions and leopard are present.  Large numbers of ostrich, giraffe, and springbok can be seen out on the plains.   Two antelopes endemic to Namibia occur in the park: the black-faced impala and the tiny Damara dik-dik. 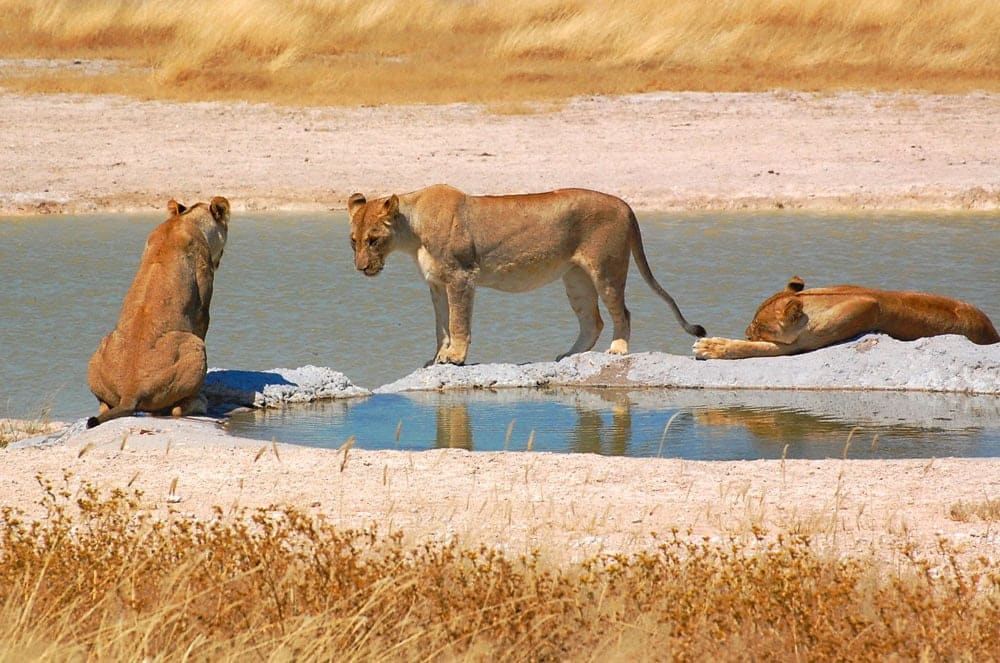 The Etosha Pan area was first discovered by Europeans in 1851.  Charles Andersson and Francis Galton were first led here by Ovambo traders.  As trade routes opened up more Europeans settled in the area and wildlife numbers dropped.  By the 1880’s large mammals like elephant, rhino, and buffalo had been nearly eliminated (in fact buffalo and wild dogs were hunted to extinction in Etosha).  So much game was wiped out that in 1907 the governor of German South West Africa declared Etosha a national game reserve.  The initial reserve was enormous, stretching to the Skeleton Coast.  But after years of political changes and controversy the park size was reduced to it’s current boundaries in 1970.  Throughout the ‘70s and ‘80s severe drought and the border conflicts between South Africa and Angola decimated the wildlife.  Only through the dedicated conservation efforts (An Arid Eden by Garth Owen-Smith is an interesting history of conservation in Namibia) did Etosha’s wildlife return to their former numbers.

We offer a range of Namibia Safaris that visit Etosha.  Join our 10 day Namibia Adventure Safari or our 14 day  Nambian Experience to visit this extraordinary national park.